Centennial of the shots in Sarajevo 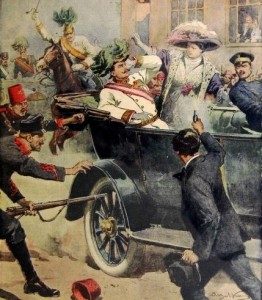 The murder of Franz Ferdinand and Sophie as illustrated by Achille Beltrame.

Today it is exactly 100 years since the ill-fated attentate on the Austro-Hungarian crown prince Franz Ferdinand and his wife Sophie. The double murder is traditionally viewed as the event which started the First World War and even if its position in history as the unavoidable ignition of the war can be debated, there is no doubt that it was a turning point from which it had taken considerable effort and will to stop – a will that didn’t exist at that moment in time. Instead the hard demands put forward by Austria-Hungary on Serbia became an ultimatum and then the fire was unstoppable before it had spread and brought destruction to most of Europe and the rest of the world.