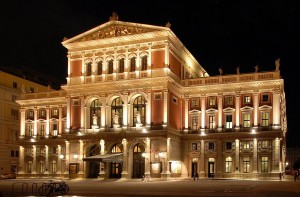 The New Year’s Concert in Vienna is a longstanding and very popular tradition on New Year’s Day, which is broadcast on TV not only in Austria and the German-speaking countries of Europe but also in more than 70 other countries around the world. Since 1939 the concert is held in the Großer Saal (Large Hall) in the Wiener Musikverein, situated in the city centre of Vienna.

The classical music performed always include works written by the famous Strauss family.