Malbork – A crusader castle at the Baltic Sea coast 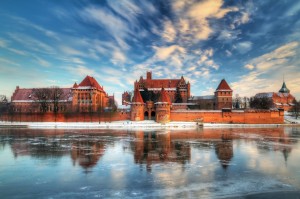 Situated at the southern coast of the Baltic Sea in Poland is one of the largest medieval castles of northern Europe. Malbork, or Marienburg as it is known in German, once served as the headquarters for the Teutonic Order whose crusader knights once ruled a large swath of of land along the southeastern and eastern coasts of the Baltic Sea.